We kindly invite you to our opening ceremony of this year’s International Workshop on Nitride Semiconductors at the Maritim Hotel Berlin. The opening words are going to be followed by a get-together in the Garden Hall. Before the official program, you have the opportunity to explore Berlin in one of our guided tours (see Excursions: August 23, 2020).

Experience Berlin in the charm of the golden twenties.
The dinner is musically framed in the style of the 1920s by the Berlin Street Swing Band Manuel von Eden, who will make sure that everyone in the room wants to swing their legs.
Enjoy the evening with colleagues and friends and let Charleston ladies, a nostalgic photo box, artists and well-known musicians of the city take you away into the cultural diversity of Berlin - as it was and as it is.

Please join happy hour reception to network and mingle with others in the nitrides community following the Monday poster session at IWN 2020. Location TBD but space may be limited.
This event is sponsored by Facebook AR/VR.

This tour lets you visit the wonderful Prussian palaces "Sancoussi", which was constructed in 1745 –1747 as the summer palace of Frederick the Great, King of Prussia. Today, Sanssouci has lost none of its special charm, as the rooms still have their original furnishings and design. Castle and garden are UNCESCO cultural heritage since 1990, selected for the extraordinary synthesis of 18th century art styles from all over European cities and courts. After a guided tour in small groups through the palace, you will have time to linger at the beautiful park and grounds, which are more impressive than ever. 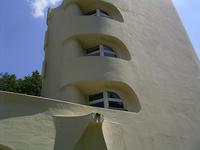 The Einstein Tower is an architectural marvel, built between 1919 and 1922 by Erich Mendelsohn as a solar observatory. Nowadays, the tower is used by Potsdam astronomers to measure the magnetic fields on the sun and to understand the activities of the sun. Per guide, up to 15 people can visit the Einstein Tower from the inside. The tour lasts 60-90 minutes and is conducted by scientists of the Leibniz Institute for Astrophysics Potsdam. Afterwards there will be a tour through Sanssouci palace in smaller groups.

Would you like to explore Berlin by boat? Just enjoy the metropolis in a relaxed way from the water. Our boat tours will take you along most of the city's most beautiful sights and famous places including a lunch. Berlin is a city of rivers and canals. On our journey, we will pass by historical and new buildings. You will see the Museum Island, the Berlin Cathedral, Alexanderplatz, the Nikolai Quarter, the government quarter with the Reichstag, German Chancellery, Bellevue Palace, the House of World Cultures and many other highlights.

Berlin's memorials and monuments remind us of the past, of the times under National Socialism and of the division of the city before the Berlin wall came down in 1989. Enjoy our Hop-on Hop-off sightseeing tour and visit some of the most famous monuments of Berlin. The new guardhouse on the boulevard „Unter den Linden“ is the official memorial for the victims of war and tyranny. Next to the Brandenburg Gate is the Memorial to the Murdered Jews of Europe with its 2711 concrete stelae. The Bernauer Strasse Memorial gives a lasting impression of the Berlin Wall as well as the Check-Point Charly, where we remember the division of the city. 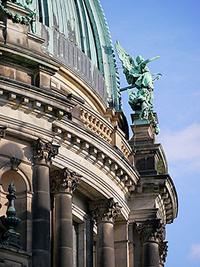 We will shuttle you to the Museum Island, which is a century of cultural politics. Consisting of five different museums (Bode-Museum, Pergamonmuseum, Altes Museum, Neues Museum and Alte Nationalgalerie) a huge art collection awaits you. As a highlight, you will join a guided tour through the New Museum, where you can see Nefertiti. After our tour is ended, you will have one hour of free time to explore all the interesting sights of the Museums Island.